When you have a major public event to stage, it’s wise to bring in an experienced event production partner.

This event could be outdoors on a river, at night time, with specialty contractors and audio, lighting equipment scattered along a site 550 metres from one end to the other end. Such an event requires a thorough risk assessment with a comprehensive safe work methods statement documented and adhered to along with power generators distributed around the site, solid communications, dependable security, additional night time lighting, rain protection for equipment, secure barriers on the river’s edge and more.

Avoiding the pitfalls such as a child jumping a barrier and entering the water, a radio microphone dropping out during the mayor’s presentation or an adult spraining an ankle on the uneven steps are accidents every event producer is seeking to mitigate and hopefully eliminate completely.

At times, clients do not see the value of thorough pre-production, whether logistical, creative or technical and cannot appreciate the choice of redundancies put in place for the more risky elements to ensure ‘the show goes on’.

NEXTGEN is a specialist audio-visual event producer with significant experience providing community and large event AV services to some of Melbourne’s largest and local government bodies. The skillset and professional approach of their multidisciplinary team is well aligned to the services requested by any organisation; corporate, cultural or government.

The Moonee Valley Festival in 2019 was spread across many events in the Moonee Ponds area over February and March with local culture, performances, art and food, culminating with a water spectacular named Illuminate the River on Saturday 30th March 2019.

Many months prior to the event, the NEXTGEN team headed by Guy McGregor assembled the talented technical team of laser specialists, lighting programmer, time-code nerds, audio designer, content creators, pyrotechnical flame and water projection specialists to conceive, plan and execute a spectacular finale for the City of Moonee Valley.

The main show revolved around the custom soundtrack created especially for this event, defining the style and emotional journey of the story. From the time-coded soundtrack, all elements were conceived and storyboarded: water fountains, water screen and projection content, laser light show, audio voice-overs, lighting show and flame bursts culminating with an immersive experience that filled the audience with delight.

Unlike the poor weather offered over the weekend, the technical, logistical and creative elements went off without any glitches enthralling and delighting the audience who braved the rainy and windy conditions resulting in positive social media and community outcomes to close out the Moonee Valley Festival for 2019 in spectacular style. 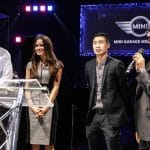 Top 3 Reasons Why You Should Hire An External AV Company.AV Questions

Event Webcasting. What you need to know.AV Questions